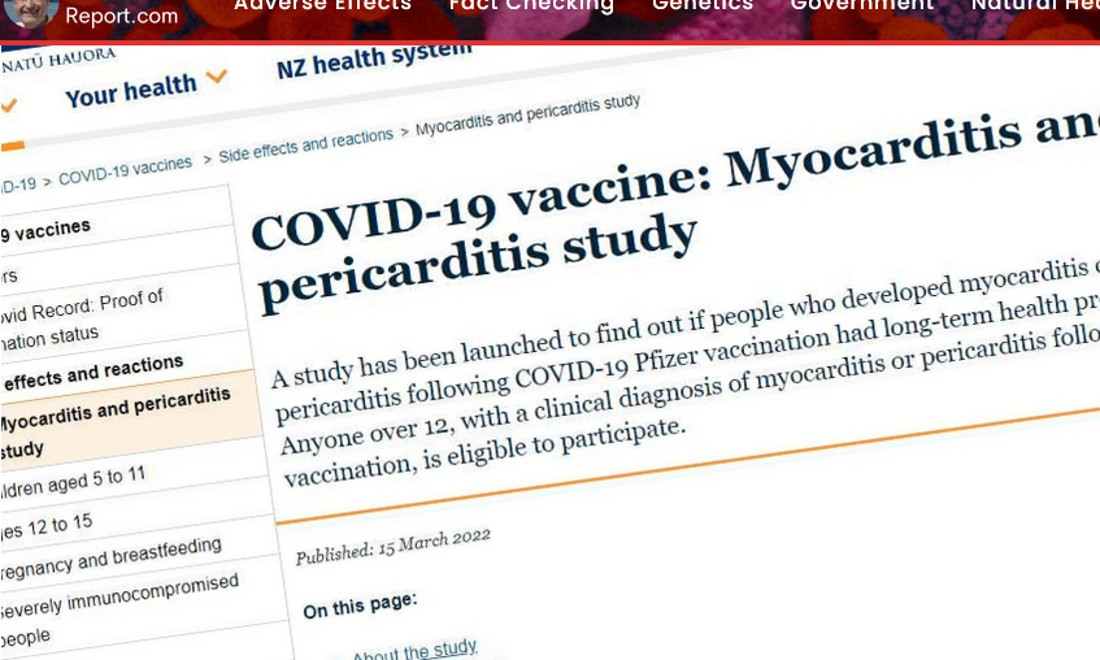 This week we were subjected to a piece of theatre that transported us all into an uncertain future.

The problem is that for two years Jacinda Ardern, backed up by government-funded saturation advertising, has been educating the public that Pfizer mRNA vaccination is completely safe and fully effective. MSM has backed up Jacinda to the hilt.

This one-sided propaganda has created a counterrational outlook.

Light at the End of the Tunnel?

Meanwhile, in a parallel universe, some sense of contrition is creeping in at the edges. The Ministry of Health has announced it is conducting a survey of those affected by myocarditis and pericarditis.

To participate you will need to have registered an adverse reaction at CARM and seen a physician.

If you are affected by symptoms of myocarditis following vaccination such as:

and haven’t registered with CARM already, I suggest you do so right away.

You should consider registering a copy of your submission with NZDSOS. For full details of the Ministry of Health survey go to:

I note that in a survey such as the one projected by the Ministry of Health, the results will be skewed by the absence of submissions from those who have already died as a result.

If you know of such cases subsequent to vaccination, I suggest that you contact both Ministry of Health and NZDSOS to ask how their details may be added to the final result of the survey.

We can be forgiven for thinking that Ardern’s is a counterrational world. One part of the government continues to tell us that mRNA vaccination is completely safe and effective, while another part of the government is starting a survey to identify and monitor those whose heart health has been adversely affected.

Meanwhile, the government has just announced it will appeal the recent court ruling which struck down their vaccination mandates for police.

So the Ministry of Health is wondering what their long-term prognosis might be, whilst the government is going to court to insist that the police continue to be required to risk long-term cardiac damage.

Truth and Reconciliation is Needed

In other developments this week, the government’s announcement that vaccination passes are ending has led to a measure of confusion.

Some of Jacinda’s followers are apparently feeling cheated and betrayed. There has been an outburst of hate speech against unvaccinated individuals.

Someone posted a tweet referring to TVNZ news host Hilary Barry speaking last year when she referred to all unvaccinated people as unwashed ‘feral’ (a particularly offensive epithet in New Zealand) members of a street gang.

As a result, Barry’s Twitter followers reprised their approval and erupted in praise. Someone called for the death penalty for all unvaccinated. Some who tweeted dissent were blocked by Barry.

This morning when I looked, death threats against the unvaccinated were still up on some Twitter feeds of vocal Barry supporters. Some called for unvaccinated people to have their children removed into state care.

In the past, Barry has also called for unvaccinated people to be transported to a remote island (a suggestion that did lead to online threats against Barry).

After a complaint, the Broadcasting Standards Authority (BSA) found in Barry’s favour.

It is particularly concerning when remarks seek to dehumanise people. It is the same sort of attitude that allowed Mexican children to be held in cages at the US border without sufficient general public outcry.

The use of the word “feral” is moving towards the classification of some people as undeserving of their place in society.

Something that Jacinda Ardern appeared to condone when she admitted that her vaccination mandates were creating a two tier society.

If you condone threats against anyone on either side of the argument as the BSA did, it can only get worse.

The situation will only get resolved when Jacinda Ardern publicly tells her adoring followers that a ‘mistake’ has been made.

mRNA vaccination is actually not measurably ‘effective’ against Omicron and it can cause serious adverse effects.

When will Ardern come clean?

We hope Covid science journal publishing and political rhetoric will have to merge at some point.

A visit to the Dentist?

Until misinformation is acknowledged we are going to be living in a very strange world.

Yesterday, following the removal of vaccine passes, my daughter called up our dentist to book some much needed dental work for the family. The conversation went much as follows:

My daughter: Now that vaccine passes are no longer required, I need to book an appointment. We are unvaccinated, but we have had Covid so we are immune.

Receptionist: If we decide it is possible for you to make an appointment, you would have to come right at the end of the working day as we will have to clean the surgery after your visit.

My daughter: Don’t you clean the surgery after each appointment?

Receptionist: Yes, but we will need to complete a deep clean after you.

They haven’t yet agreed to make an appointment for us. We are possibly considered feral gang members, too unclean for their refined sensibilities.

A large part of the public have become addicted to the false sense of safety associated with vaccine passes. They have cemented a kind of group superiority that has historical parallels.

They have normalised a scapegoat psychology that falsely places the blame for everything on a class of people who want to maintain their health naturally. It is going to take a long time to return to planet earth.

Guy Hatchard has written a book Discovering and Defending Your DNA Diet.